Quality Dealer of the Year

2022 Quality Dealer of the Year 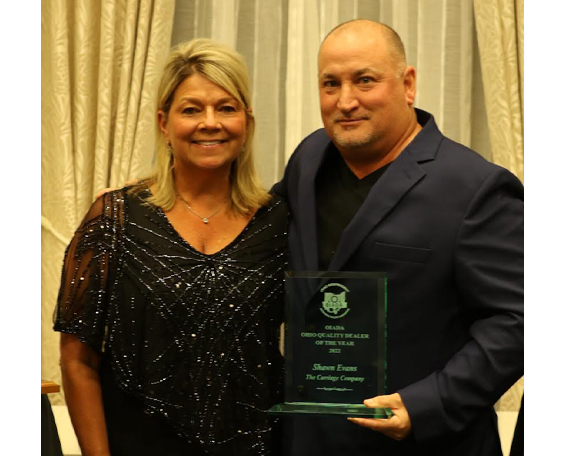 Fresh out of high school and working at a golf course, Shawn was looking at different college offers for baseball and golf.  His mom and stepdad were both retiring and were going to move to Florida.  Shawn’s mom decided they needed to upgrade his car before they moved, and they headed over to The Car Company located in their hometown of Baltimore.  His mom told Shawn she’d co-sign for him, but he only got one shot.  Rick Clum asked Shawn what he was doing for work.  Said, “how about you come to work for me being my lot guy, title runner, sell some cars”…..That was 1985.

After 10 years with the company, Shawn decided to head to Florida where he could pursue a career in golf… playing the mini tours and work in the car business to support his dream. In August of 95, Shawn took a position as a salesman with Blount Chevrolet.  After two weeks of selling, the owner offered him the finance manager position at their GMC store in Winter Haven.  Within a few short months, Shawn was promoted again.  This time to the New and Pre-Owned Sales manager.

Throughout this time, Shawn continued to play golf on the Tommy Armour & Moonlight Golf Tours.  While working full time, trying to practice his golf game, and play…..Shawn won the Polk County Amateur Championship, which was one of the largest amateur tournaments at the time.

In 1997, Shawn decided to come back to Ohio and started wholesaling with The Car Company.  Later that year, he ran into the owner of Auto Exchange who told him there was an available car lot in Lancaster…..the door finally opened and Shawn decided to venture out on his own.

The Carriage Company opened in January of 1998 and has been there ever since.  Over 23 years later, it’s still going strong, providing excellent service to their customers and their many, many, returning customers.

2021 Quality Dealer of the Year 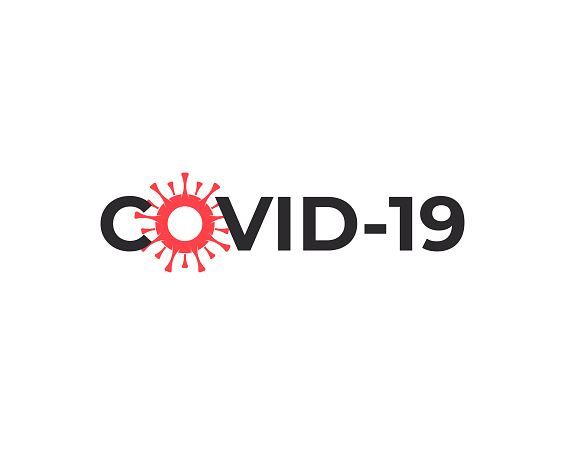 2020 Quality Dealer of the Year 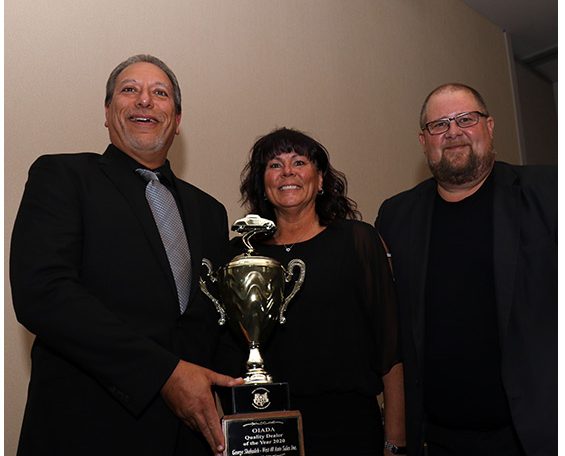 George started in the car business purely by accident. While studying Political Science in college, one of his friends asked if he’d go with him to the local Honda dealer to buy a new Civic. George noticed how busy the dealership was and made a comment to the salesman “why don’t you guys hire some help around here”, well, before he knew it; he was a car salesman at Tansky’s. After a few good weeks of selling cars, his plan of moving to Columbus and taking an entry level job in his field of study…. making ½ of what he was making with cars…. became a forgotten dream.

A couple years later in 1990, Tansky’s started to expand from new car stores to used car outlets focusing mainly on BHPH. When they decided to open a location in his hometown of Cambridge, George threw his name in the hat to be the manager. They gave him a shot.

After John Tansky passed, the family decided in 2002 to let George buy the Cambridge dealership. Estimating the value of receivables, property values, and equipment, mixed in with the 6 siblings who all seemed to have varying opinions on everything…made it a daunting task. When it became apparent that George was going to have trouble coming up with the collateral necessary, his good friend Greg Ley became his business partner and West 40 Buy Here Pay Here transformed into what is today… West 40 Auto Sales.

With the philosophy to always treat everyone with respect no matter what their financial or personal situation, their goal is to sell everyone a decent vehicle at a decent price.

2019 Quality Dealer of the Year 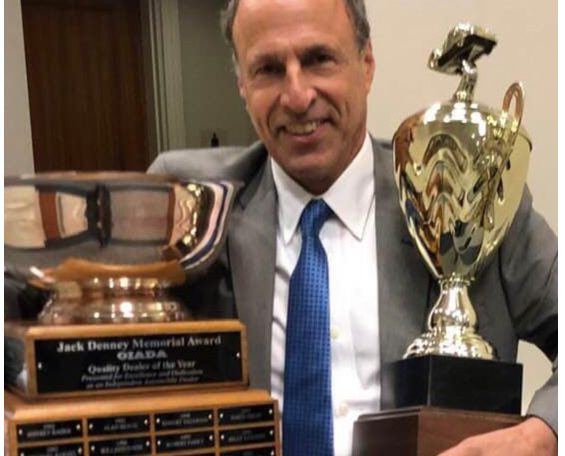 Steve came into the business naturally; his father became a used car dealer in 1945 after serving in World War II. His father, along with Steve’s two uncles built an empire known for “The Best Deals in Town”. In 1957, Steve’s father bought Ralph Stewart Buick and by 1962, Friedman Buick was the 12th largest Buick dealer in the US. Steve started as a porter in 1974 and worked his way up. Parts driver, service writer, salesman, and general manager gave him the experience he needed when he took over as dealer principal in 1993. Steve ran the dealership until 2001 when the Cleveland Clinic purchased the property.

The Friedman’s were always used car oriented. After selling the property and deciding that Gm wanted way too much for another Buick franchise; Steve renewed the Friedman Lease license and went back to the family roots of selling used cars. After seeing what happened in 2008, Steve knows he made the right decision.

In the 40 years the Friedman’s were in business, they never went court. Their reputation was their bond. They believed that if a dealer made a fair profit, didn’t brag, and treated their customers right; the customers would recommend them to their friends and relatives BUT if the customer felt they were taken advantage of, they’d never see them again and they’d spread their bad experience. Steve has followed in their footsteps.

Whether serving as the high school booster president, day camp liaison, or Jewish big brothers & sisters, Steve is an active member of his community. Nominated for the OIADA quality dealer award in 2017 and voted one of the Top 13 Used car dealers in Cleveland by Expertise in 2017 and 2018.

2018 Quality Dealer of the Year 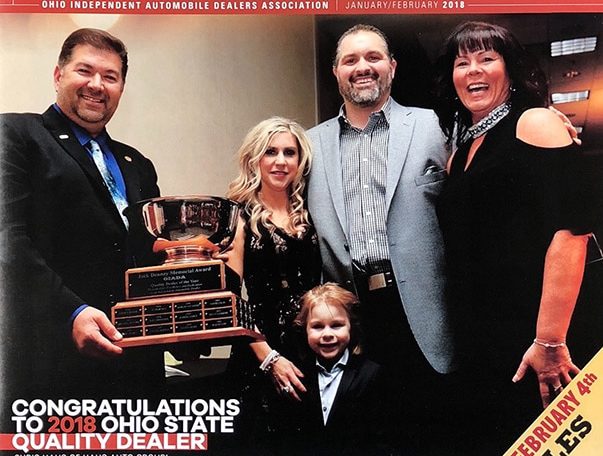 In 1994, Chris started his automotive career with Vintage Auto Group. His love for cars and attention to detail aligned perfectly with his first job as a vehicle detailer. It wasn’t long before Chris was promoted and was responsible for the placement, appearance, and reconditioning of all retail and wholesale vehicles.

In 1998, Chris joined his father at Ron Haus Motor Cars as a buyer and after a few years, became the Operations Manager. Over the next six years, Chris developed wholesale sales of more than 2100 units per year while managing valuable relationships with both customers and vendors.

Chris leveraged his previous business experience and in 2004 successfully designed and developed a 12 bay Automotive Service facility, and developed the Internet Sales and Marketing department.

In 2007, Chris started a Related Finance Company to purchase the buy here, pay here installment contracts from the dealership and added the responsibility of Sales Manager to his list of duties in 2008.

With 22 years in business, and 25 employees, Haus Auto Group is a proud participant in the community. Offering free unlimited car washes to all their customers, it’s common for friends and customers to come by and hang out or just drop in and say hi.

2017 Quality Dealer of the Year

Dave Rolfes grew up in Celina, Ohio. Dave began his career in the car business in 1978 as a salesman at Bruce Green Ford. In 1982, he decided to venture out on his own into used car sales and opened Coldwater Auto Sales in Coldwater, OH. Two years later, Dave opened a second dealership located in Celina and named it Select Motors. After six years of operating both locations, Dave expanded the property in Celina to include a total city block for frontage. In 1988, Dave closed Coldwater Auto and moved the entire business to Celina doing business as Select Motors. In 2007, longtime salesman, Matt Cahill became part owner. Matt, who grew up in St. Henry, OH joined the staff at Select in 1986 as a part time salesman while working full time at Crown Equipment. Over time, cars and car sales became Matt’s passion and Matt went full time in 2002. Just like the working relationship of Dave and Matt, Select Motors has grown into a solid and successful dealership over the last 32 years. In addition to monetary donations from the dealership, the employees of Select donate numerous hours of their time to charities and community events. They have 7 full time employees and 2 part time, with average sales of 400 vehicles per year.